MSA is Breaking Records while Boosting the Economy & the Community!

Mobile, AL - This week, the Mobile Sports Authority (MSA) reported that for the recently-completed fiscal year ending September 30, 2016, the organization attracted, supported, and/or hosted a record number of sporting events for the Mobile area.  For the year, the MSA attracted/hosted a total of 35 sports events, generating an estimated $26 million to the Mobile area economy (MSA Scoreboard below).  The 35 events involved 24 different sports, from running to gymnastics to volleyball to football, plus many others.
These numbers represent the best annual results ever reported by either the Mobile Sports Authority or its predecessor organization, the Mobile Area Sports Commission, which dates back to 1998.  Prior to this year's feat, fiscal year 2015 held the record with 32 sporting events and a $20.7 million estimated economic impact to the area.
"With the tremendous support of Mobile County, the City of Mobile, and a very engaged board of trustees, we at the Mobile Sports Authority are proud that we were able to generate such a significant impact for the Mobile area economy," said Danny Corte, Executive Director of the MSA.  "Since October 2011, the MSA has attracted, hosted, managed, or co-managed 130 sporting events which have generated an estimated $91 million for Mobile County. The future looks just as bright as we continue to tell our story about our beautiful area to numerous regional and national sports event owners who are looking for places to play."
As a cap to the year, the Mobile Sports Authority planned and hosted the inaugural 5th Quarter Classic; a college football game played at Ladd-Peebles Stadium, featuring Tuskegee University and Florida A&M University, which had over 19,000 in attendance. The five-day game week hosted many out-of-town visitors coming in for the Classic's events leading up to gameday. The week was filled with motivational talks with local high school seniors, a college fair, a Broadway-style show put on by FAMU, alumni festivities, tailgating and a traditional Mardi Gras-style parade. This event also brought in over $2 million in scholarship offers to Mobile area youth from various colleges and universities. 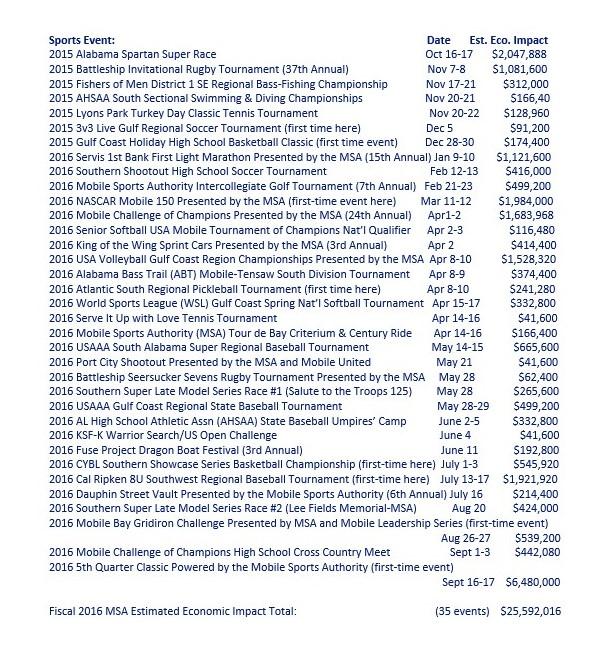 The Mobile Sports Authority (MSA) is a non-profit sports commission formed in 2008 by the Mobile County Commission. The main mission is to create a positive economic and public relations impact for Mobile County, the City of Mobile, and the region through attracting, hosting, managing and supporting sporting events which attract visitors to the Mobile area.  MSA is the main point of contact for sports and sports-related activities for the Mobile County area. For more information on MSA, please visit mobilesportsauthority.com.